The Wolf and the Wedding

Story Time, my pets.
This story first appeared in Cricket magazine in 2004. The author, Rachelle DeSimone, has kindly allowed me to publish it on my blog. IT is one of my favorite stories that I have illustrated.(Click on the images to see a larger version). It is so appropriately chilly for a cold snowy evening by the fire. I hope you have one, and are sitting by it while the wind howls outside your windows.


The Wolf and the
Wedding
by Svetlana Ilyinykh and
Rachelle DeSimone 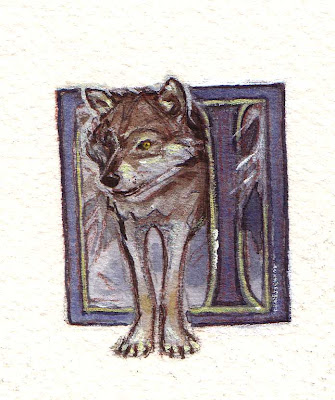 IN KSUSHA’S VILLAGE of Chudovo, everyone knew the
wolf. He appeared at the edge of the forest whenever
there was a wedding feast. He’d sit on his haunches and
watch the dancing, singing, and eating, his eyes alert and eager
and fixed on the bride.
So when it was time for Ksusha Prekrasnaya to marry, she
told her funny, beloved, strong Alyosha that they must wed in
Budogoshch, a town with a proper church that was some miles
away, too far for the lone world to travel.
The wedding was elegant and fine. The feast afterward was
even better. Ksusha’s parents and her grandparents, Babushka
and Dedushka, had filled the hall with fragrant dishes of stuffed
fish and grilled quail with kissel and scalded spice cakes for
dessert. Alyosha ate and drank, ate and drank, and then drank
and drank.
Ksusha reminded him, gently and lovingly as a good wife
should, that he must stop drinking and take her and the rest of
the wedding party home to Chudovo.
Alyosha turned to his friends Ivan, Roma, Dima, Stas, and
Valya, who were refilling their glasses. “My wife wants to go
home!” the bridegroom yelled. “A good sign for a prosperous
marriage, is it no?”
Ivan, Roma, Dima, Stas, and Valya laughed, and Ksusha
Prekrasnaya, red-faced, stared at her plate.
At midnight, Alyosha staggered up from the table. “Come,
my little chicken,” he said, gathering Ksusha and her family
into his beautiful troika. His three fine horses snorted nervously
at his touch.
“We go!” the bridegroom called, and the horses took off,
trotting fast on the road through the forest that led to Chudovo.
The wedding party wasn’t yet deep into the woods when
the wolves appeared. They stood by trees, silent and watching,
as the sleigh moved on the icy path. A lone wolf under a mas-
sive cedar howled a greeting, and the wolves began loping
behind the sleigh.

Ksusha and her family watched as the path filled with ten
wolves, then twenty, then thirty. Soon one hundred wolves
followed the sleigh.
Alyosha snapped the whip to hurry his horses. The wolves
began to howl.
Ksusha had heard wolves howl before, but never this many
and this close. The sound was terrifying, and the bride huddled
next to her funny, beloved, strong Alyosha.
“We must stop this pursuit, my little chicken,” Alyosha said.
“They will tire my poor horses. Hold the reins and keep driving.”
And with those words, he reached back, pulled Ksusha’s
grandmother from her seat, and threw her out of the sleigh. 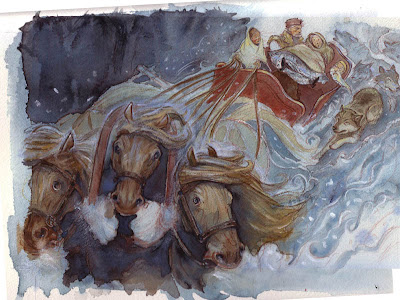 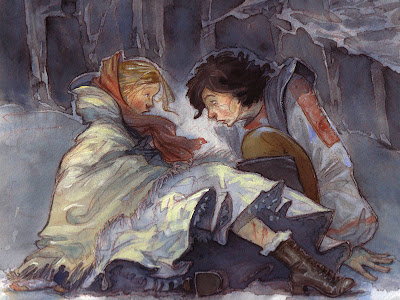 “Don’t yell so,” the wolf said. “I won’t bite you again.”
Ksusha looked up and saw the wolf changing shape. Pointed
ears became flat circular flaps, the long nose receded, the sharp
teeth shortened, and the fur shrank into fine soft hair.
Standing before Ksusha was a handsome young man. “I
am Sergei,” he said, bowing low before her.” “Let me take you
to my castle where I can fix your wound.”
Ksusha held onto his arm and limped through the forest.
She glanced anxiously around her.
“What is your worry?” the man said.
“The wolves may return.”
He smiled. “I am great friends with the wolves. You will
never have to fear them again. You see, an enchantress who
inhabits this forest changed me into a wolf some years ago
after I refused to marry her. Her spell could only be lifted it I,
a wolf, would bite the leg of a bride on her wedding day. Since
then, I have lived with the wolves and waited to meet my perfect
bride.”
They arrived at the man’s castle. Ksusha trembled as she
saw dozens of wolves lying under the trees, licking their paws.
“Don’t be frightened, my dear,” Sergei said, his arm around
Ksusha.
“But they killed my parents, my grandparents, and my
sister.” 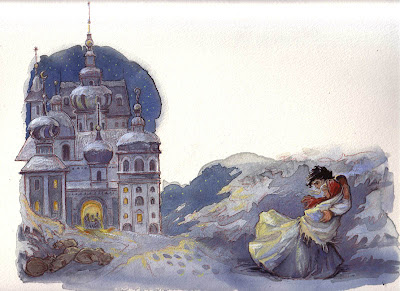 At that moment the door to the castle opened, and out
rushed Ksusha’s family, completely unharmed and quite happy
to see her.
Her father explained how the wolves had surrounded each
family member who was thrown from the sleigh, and how the
wolves had escorted each to the castle for a joyous reunion.
Sergei asked Ksusha’s father for her hand in marriage.
“I’d be most honored to have you for a son-in-law, but it’s
not possible,” Ksusha’s father explained. “Ksusha Prekrasnaya
is married to Alyosha.”
A wolf howled. Sergei tilted his head to listen.
“My friend tells me Alyosha’s horse have finally tired, and
he is stopped on the path ahead of us. At this very moment, he
is engaged in conversation with the enchantress who lives in
the forest.”
“The one who changed you into a wolf?” Ksusha asked.
“The very same. But she no longer has any power over me.
Let us ride to Alyosha’s troika.”
The wedding party found Alyosha’s troika and his three
exhausted horses on the road, but the enchantress had
disappeared. There was no sign of Alyosha either, although
Ksusha did find a bedraggled chicken hiding under the
seat. Ksusha picked up the little chicken that smelled strangely
of strong drink and tucked it under her arm. She took the
chicken home with her, and one fine evening, sometime later,
Ksusha popped it into a pot and cooked it as dinner for her
new husband, Sergei, the man who once was a wolf. 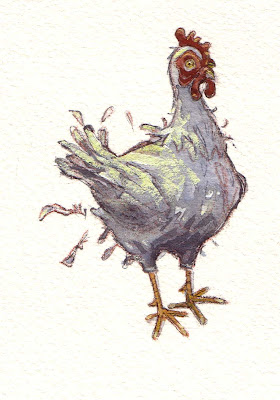 I do so love a good story.
Note to all the Alyosha's in the world: I also love chicken pot pie.
Posted by Amy June Bates at 8:36 PM