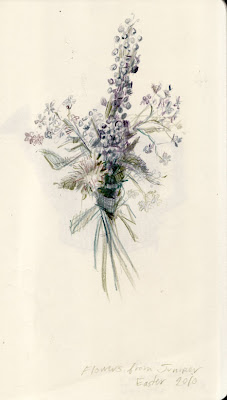 Here is bouquet of spring flowers picked by Juniper,
and three lovely reviews of my new book (coming out soon) "Bear in the Air." IN this book I got to draw my own little boy Sean in the family pram. I really did push all three of my babies around in it. It is very bouncy. 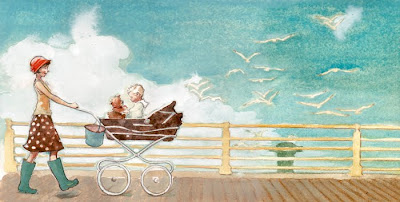 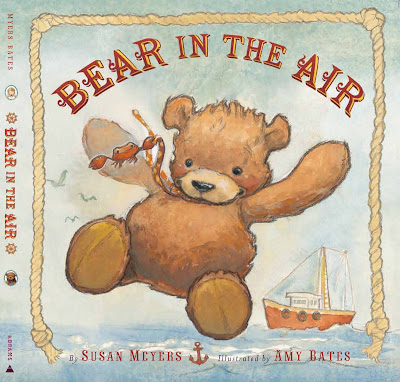 Publishers Weekly gives Bear in the Air a *starred* review in this week’s issue!

“The stuffed animal carried away on a long, unexpected journey is a perennially popular theme; here, it’s illustrated with delightful attention to period detail by Bates (The Dog Who Belonged to No One). The baby who owns the unfortunate teddy bear is accompanied by a young mother in wellies, a polka-dot skirt, and a snug cloche hat for their boardwalk stroll at some pre-WWII seaside resort town. Bates works in roughly sketched pencil and soft, lustrously shaded watercolors, evoking a lost, gentler age. Meyers’s (Puppies! Puppies! Puppies!) verse is sturdy, obedient to its metric structure: “This is the dog that found the bear,/ Shook it and tossed it high in the air,/ Carried it down to the sandy shore,/ Trotted away with the ribbon it wore.” Bates honors each person, creature, or force of nature the bear encounters (from sailor to seal to sea breeze) in stately picture frames that appear at the start of each leg of the bear’s journey under the sea, up into the sky, and eventually—to readers’ relief—into a neighbor’s yard to be rescued by its owner. Ages 4–8. (May)”

A young mother puts her baby and his teddy bear into an elegant pram and wheels them along a boardwalk overlooking the sea. When Bear falls to the ground, a dog grabs him and romps down the beach. A wave pulls the teddy bear into the water, a seal takes him deep below the surface, and a pelican swoops him up into the sky, dropping him on land. A lady hangs Bear out to dry on her clothesline, where the bemused Mother and happy Baby find him. Told in graceful, rhyming couplets, the story of Bear’s adventures unfolds in a pleasant manner. The pencil-and-watercolor illustrations, which create a 1920s setting, feature nicely proportioned human and animal characters drawn with energy and expression. Young children will find plenty to enjoy in the pictures, including a little red crab that tags along with Bear and, near the end, a bird’s-eye-view map featuring landmarks and characters that will help viewers retrace the teddy bear’s journey. A handsome picture book with a satisfying story and artwork as fresh as a sea breeze.
— Carolyn Phelan

To a “House That Jack Built” rhythm and style, a teddy bear has a great adventure when a baby drops it out of his carriage and it falls, hidden, beneath the wheels of a lemonade stand at the beach. After baby and mother leave, a dog finds the bear and plays with it for a bit before discarding it. Waves swallow up the bear, and eventually a bird snatches it out of the water, takes it for a ride in the sky and drops it in the yard of a woman who hangs the wet bear on her clothesline—where mom and baby spot it for a happy reunion. There is a familiarity here that is comforting, but that very predictability may make older preschoolers wish for an unexpected twist. Bates, however, creates a nice vintage feel with her expressive, traditional watercolors, framing key characters like portraits as they are introduced. Overall, the direct plot, retro styling and satisfying end may remind adult readers of the days when picture books were a quieter pleasure—like a glass of cold lemonade in the summer.
Posted by Amy June Bates at 5:58 PM